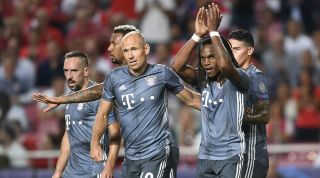 Renato Sanches marked his return to the Bayern Munich fold with a superb goal against his former club as Niko Kovac's side ran out 2-0 winners over Benfica in their Champions League Group E encounter.

Having endured a torrid loan spell at Swansea City last term, Sanches was handed his first Bayern start since May 2017 at Estadio da Luz, and - after playing a part in Robert Lewandowski's opener - the youngster duly repaid Kovac's faith in the 54th minute when he got on the end of James Rodriguez's delicate cross.

However, things could have been different if not for Manuel Neuer, who kept Benfica at bay with a string of impressive saves either side of the interval.

Serge Gnabry had a goal disallowed for offside as Bayern looked to extend their lead, but that decision mattered little as Kovac continued his winning start.

Bayern were ahead in the 10th minute - Sanches picking out Franck Ribery, who combined with David Alaba to cut back for Lewandowski to tuck home.

Arjen Robben and James both passed up chances as Bayern dominated, and their profligacy would have been punished had Neuer not kept out Eduardo Salvio's strike.

But Benfica's hopes of a comeback took a blow shortly after the interval - Sanches on hand to hammer home from close range to cap off a move that he started.

Jardel and Ruben Dias tried their luck with headers around the hour, but Neuer was in top form to keep Bayern's clean sheet intact.

Substitute Gnabry thought he had put the game beyond all doubt in the 68th minute, only for the offside flag to prevent Bayern adding further gloss to the victory.

What does it mean: Bayern join Ajax at the top, Benfica's dreadful run continues

Group E should not present a tough task for Bayern, with Rui Vitoria's side arguably the sternest opposition they will face. Ajax's 3-0 win over AEK Athens means that it is the Eredivisie giants who top the group as it stands, though. Benfica, meanwhile, have now lost their last eight Champions League matches.

Pat on the back: Sanches back with a bang

Sanches' career at Bayern has been an unmitigated disaster, but under Kovac there could be a way back for the youngster who stole the show at Euro 2016. Back at his former stomping ground, the midfielder was exceptional, and received a standing ovation from the Benfica supporters after netting the visitors' second.

Boot up the backside: Robben misfires

While Ribery starred on one flank, fellow veteran Robben was not at his best down the other. Three times the Dutchman got through on goal with only Odisseas Vlachodimos to beat, but on each occasion he failed to beat Benfica's goalkeeper, and is fortunate that his wastefulness did not prove costly.

Desportivo Aves are up next for Benfica on their return to Primeira Liga action, while Bayern face Schalke - who are still without a win this term - in the Bundesliga.