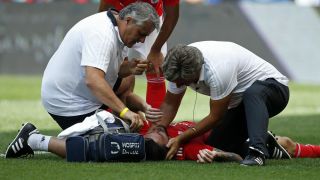 A seemingly serious injury to Facundo Ferreyra marred the International Champions Cup match between Benfica and Juventus that the Bianconeri won via a penalty shootout.

Jonas hit the post and Mattia Perin saved from Joao Felix to allow Alex Sandro to roll in the winning spot-kick, earning Juve a 4-2 triumph after a 1-1 draw at the Red Bull Arena on Saturday.

But Ferreyra leaving the field on a stretcher wearing a neck brace remained the defining moment of a low-key ICC contest that was lit up by two fantastic second-half finishes.

Benfica's new signing Ferreyra caught team-mate Jardel in a heavy collision that left the former Shakhtar Donetsk striker needing lengthy treatment and he will be a serious doubt for next month's Champions League third qualifying round tie against Fenerbahce.

Serie A champions Juve lacked coherence in their play throughout and Benfica took a deserved lead in the 65th minute, Alex Grimaldo deceiving substitute goalkeeper Perin with a 25-yard free-kick that dramatically dipped under the woodwork.

Juve were without big names including star signing Cristiano Ronaldo and Argentina attackers Paulo Dybala and Gonzalo Higuain, and it was Luca Clemenza who produced a superb equaliser with just six minutes to play.

Alex Sandro then earned Juventus a penalty shoot-out win, with Massimiliano Allegri's side playing Real Madrid in their last ICC meeting, while Benfica take on Lyon.