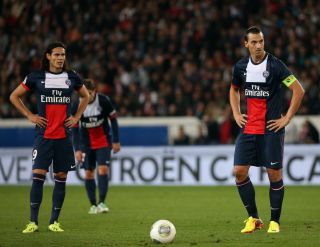 PSG possess one of the deadliest attacking combinations in Europe with Uruguay's Edinson Cavani joining Sweden's Zlatan Ibrahimovic at the Parc des Princes this season.

While the big-money partnership has yet to reach its potential, Jesus has warned his team of the threat Cavani and Ibrahimovic represent and believes they can form a lethal partnership.

"Both (Cavani or Ibrahimovic) are great," Jesus said when asked which of the pair is a better player on Tuesday.

"I think you are questioning if they can both play together for PSG.

"I am not PSG manager but I think that great players can always play together.

"So if this is what you are questioning that is my answer: They are both great players."

After a first-up home win over Anderlecht, Benfica will face a far greater test against the French champions on Wednesday.

While PSG have a strong record on their home turf, Jesus said the large contingent of Portuguese living in Paris will work in his side's favour.

The Benfica boss said his side were made to feel welcome on their last visit to the French capital and in confident it will help his side perform to their best on Wednesday.

"This is not the first time that Benfica come to Paris. We've been here before playing Europa League," Jesus said.

"So we know we will be welcomed by the Portuguese community in France, and that is very important.

"We hope they can create an amazing atmosphere for our players. We will feel as if we were in Portugal.

"As you know, Paris has the second most Portuguese people of any city in the world behind only Lisbon, so we can benefit from that. Obviously we will have to do our part on the pitch."