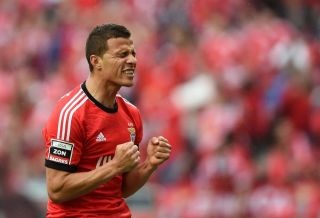 Jorge Jesus' men have had a superb campaign, and for many weeks it has appeared a matter of when and not if they would secure a 33rd league title.

The question of when was finally answered on Sunday, a double from Brazilian Lima doing the damage as Benfica wrapped up the championship in front of their home fans at Estadio da Luz, as second-placed Sporting Lisbon sit seven points adrift with just two games remaining.

It took 57 minutes for Benfica to make the breakthrough, as Lima tapped home after Nicolas Gaitan's original shot was saved by Vid Belec.

Four minutes later it was two, the 30-year-old bursting down the right before his tame shot squirmed through the legs of Belec.

The hosts were left to celebrate at the final whistle, while Olhanense remain rooted to the bottom of the table and are fast running out of time to stave off relegation.

Benfica have tasted defeat just once in the league this season, that coming on the opening day of the season in a 2-1 setback at Maritimo back in August.

Since then Jesus' men have gone 27 league games unbeaten, and have now won 11 straight games.

It caps a remarkable turnaround after such a bitterly disappointing end to last season, when Benfica were pipped to the Primeira Liga title by Porto, while also suffering defeats in the final of the UEFA Europa League and Taca de Portugal.

Benfica will now switch focus to their other challenges this season, and incredibly can still complete a quadruple.

A Europa League semi-final with Juventus awaits this week, while also on the horizon is a final-four showdown with Porto in the Taca da Liga as well as the Taca de Portugal final with Rio Ave.