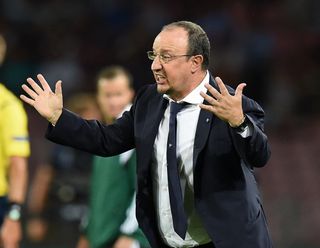 Benitez's men were held 1-1 at home in the first leg of the play-off, and will need to score at the San Memes on August 27 to have any hope of reaching the group stages.

The Spanish tactician said his men, who came from behind courtesy of Gonzalo Higuain's 68th-minute goal at the Stadio San Paolo, had the attributes to advance despite needing to score in Spain.

"We saw the game I expected to see," Benitez told Sky Sport Italia.

"Athletic Bilbao are an intense side who work hard but at the start we had two or three great scoring opportunities. We didn't [convert] and with their intensity Athletic took control.

"Considering the way the game went, we can consider our reaction positive and must begin again from that.

"Athletic will certainly go out there to win, which means they want to score and so do we.

"I have confidence, of course it won't be easy, but today we proved with five or six scoring opportunities that we can hurt them."

Higuain was frustrated after the final whistle but Benitez credited that to the Argentine striker's passion to qualify for the elite European tournament.

"Higuain is angry, like everyone, as we expected a tough game and to win it," Benitez said.

"At least it means he'll put even more determination and anger into the second leg."

Uruguayan midfielder Walter Gargano was handed a start for Napoli, and Benitez said his decision was vindicated.

He added centre back Miguel Britos was forced to play out of position but Benitez hailed the 29-year-old's flexibility.

"Gargano was one of the best players on the field tonight, so it's easy to explain why I chose him," he said.

"We know Britos is not a left-back but we're working with him in training and he did much better in the second half.

"On the goal [conceded] he looked at the player too much and not the ball but he has the capabilities to perform this role.

"At this moment he's in better physical shape than the others, so he played tonight."