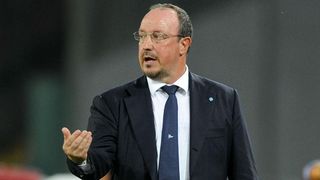 Napoli coach Rafael Benitez has been handed a one-game touchline ban after remarks made following his team's 2-2 draw at Parma on Sunday.

Benitez's men twice came from behind to earn a draw against their already-relegated hosts, as their hopes of UEFA Champions League qualification suffered a blow.

After the game, Benitez allegedly shouted "s*** Italian football", a remark that means he will miss the Serie A meeting with Cesena on Monday.

Napoli forward Gonzalo Higuain has also been hit with a €10,000 fine for "severely insulting the opposition goalkeeper", Antonio Mirante.

It is hardly ideal preparation for Napoli's UEFA Europa League semi-final second leg against Dnipro on Thursday, having drawn 1-1 at home in last week's first game.