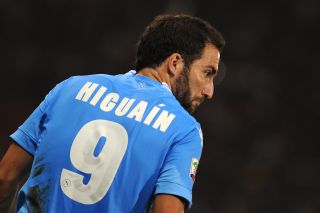 Higuain has been struggling with a hamstring injury recently, but made an influential impact at the Stade Velodrome on Tuesday as Napoli secured their second victory of this season's UEFA Champions League.

The Argentina international played in Jose Callejon for Napoli's opener just prior to half-time before being replaced by Duvan Zapata, who duly added to their advantage with a curling strike.

Andre Ayew pulled one back for the hosts late on, but the visitors hung on to move level on points with Arsenal and Borussia Dortmund in Group F.

And Benitez is confident that Higuain will soon return to full fitness after making his first start since Napoli's 2-1 Serie A win over Milan in September.

"(Monday) he trained very well and we decided to let him play," he told Mediaset Premium.

"A hamstring problem is not easy to overcome, Gonzalo still lacks the pace but will soon return to his level."

The former Liverpool manager also reserved praise for Zapata, and is adamant that the Colombian attacker will not be leaving the club in the January transfer window.

"Duvan is young and comes from another league, he must understand the language and get to know his team-mates," he added.