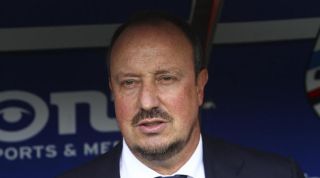 Napoli took the lead in the final minute at San Siro via Jose Callejon's second of the match but the visitors were forced to share the spoils after Hernanes headed home in injury time.

Callejon's 79th-minute opener had been cancelled out by Fredy Guarin within three minutes after a scoreless first half in Milan.

However, Benitez was pleased with how Napoli performed in the second half as his team extended their unbeaten streak in Serie A to four games.

"I must be happy with the team's second half performance in a difficult stadium against a tough side," the Spaniard told Sky Sport Italia.

"I think it's very positive that we took the lead twice, while it is disappointing that we conceded again straight away.

"We struggled in the first half but I was very happy with the reaction after the break. As the game went on, I saw Inter push forward more and leave more spaces, so we could create more chances."

Benitez was particularly happy with Spanish midfielder David Lopez, who arrived from Espanyol at the start of the season.

"Jorginho was returning from injury today, we lost [Walter] Gargano and [Gokhan] Inler was coming back from international duty. Inter pressed us and I think Inler and David Lopez did fantastic work defending today," he said.

"We must remember David Lopez only just joined us and is still adapting to Italian football but he's doing a great job."

The former Inter boss leapt to the defence of Argentina international striker Gonzalo Higuain in the midst of his scoreless start to the league campaign.

"Higuain has scored in all the other competitions, he is a very important player for us and the goals will come," said Benitez.

Benitez also defender captain Marek Hamsik, who was substituted just past the hour-mark in Milan.

"We all know he has freedom of movement on the field but it's not easy to find space against a team with three at the back," he added.

"He knows he can move around and help the team, both when attacking and defending.

"The other teams know Hamsik is dangerous and make it increasingly difficult for him to get time on the ball. It's a simple issue of how many players are in those areas."