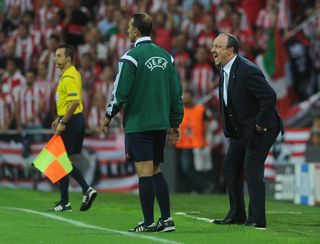 A 3-1 defeat to Athletic Bilbao in Spain on Wednesday condemned the Serie A outfit to a 4-2 loss on aggregate in their play-off tie.

Napoli appeared on track for a Champions League berth when captain Marek Hamsik opened the scoring two minutes in at the San Mames.

But lapses in defence cost Napoli as Bilbao scored three goals in 14 second-half minutes to secure their spot in the group stages of Europe's premier club competition at the expense of Benitez's men, who have to settle for Europa League football.

"In an objective analysis, Athletic deserved to score in the first half and did not," Benitez told Sport Mediaset.

"We took the lead, but in a few minutes we made some important mistakes and lost control of the game. We made mistakes on all three goals.

"Those goals allowed Athletic to gain confidence and we lost ours. Do I blame anyone? No, these are mistakes that happen.

"These can happen – they are not normal, but they happened anyway. We had worked over the week on specifics like corners, but we still made mistakes and clearly still have work to do."

Despite the disappointment of missing out on the Champions League, Napoli are remaining optimistic ahead of Sunday's Serie A opener at Genoa.

"Have our plans changed? No," said the Spaniard. "We said from the start Athletic were a tough team.

"We knew it could end up like this, we are all disappointed, but we have to look forward."

Benitez also responded to questions surrounding Gonzalo Higuain's future in Naples, with the Argentina international rumoured to be unhappy following the club's failure in the play-offs.

"I think at this stage we need to concentrate on the game with Genoa on Sunday," he said.

"We are all disappointed, but cannot think about whether one player is more or less unhappy than the others."