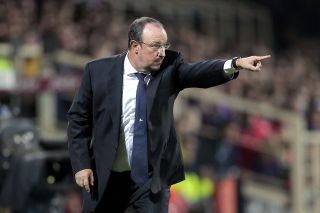 With the Naples-based club clinging to a one-goal buffer late in the contest, Fiorentina's Juan Cuadrado was sent off for simulation in stoppage time when he could have been awarded a penalty.

After the match, a frustrated Benitez would not weigh into the debate over the decision but praised his players' character after a brave defensive effort.

"Was this the right result? It was an important game, we brought out the character and didn't just play with the ball, but also very well defensively," Benitez told Sky Sport Italia.

"The penalty? We can talk for half-an-hour about this incident or the one on Dries Mertens, but I didn't discuss the penalty against Roma either.

"The refereeing designators will decide whether the official made the right decisions or not.

"I prefer to talk about football."

Benitez said the victory was a total team effort and added every player must continue to contribute if Napoli are to challenge the top teams in Serie A.

"The squad is the key for us. If we are to target the Scudetto with Roma and Juventus, then we have to make the most of every player available to us," he said.

"We don't have their experience, so that needs to improve.

"Everyone is important for us, Lorenzo Insigne and Jose Callejon (included).

"Gonzalo Higuain was meant to play between the lines, as we knew that we'd have to focus on the counter-attack tonight."