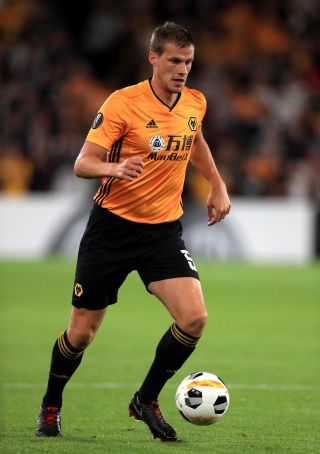 Wolves could be willing to offload Ryan Bennett ahead of Friday’s transfer deadline.

The defender has interest from the Premier League, Championship and SPL, the PA news agency understands.

Bennett has fallen out of favour under boss Nuno Espirito Santo and it remains a possibility he could leave Molineux in the next 48 hours.

The 29-year-old has been left out of the last two squads and has not made an appearance since the 2-1 defeat at Watford on New Year’s Day.

Young defender Max Kilman has moved ahead of him in the pecking order recently while Willy Boly is now fit after recovering from a fractured ankle.

But Wolves have allowed Jesus Vallejo’s loan from Real Madrid to be cut short and the defender joined Granada earlier this month.

The centre-back’s exit could convince the club to hang on to Bennett, yet he has started just three of their last 20 league games.

He featured 34 times in the top flight last year but has struggled to nail down a place this season with Leander Dendoncker and Romain Saiss preferred ahead of him and has 18 months left on his current deal.

Bennett joined on a free from Norwich in 2017, winning the Sky Bet Championship in 2018, before helping Wolves to the Europa League in their first season back in the Premier League last term.

The former Peterborough trainee has made 92 appearances, scoring three times.

Meanwhile, Wolves are closing in on Olympiakos winger Daniel Podence.

The 24-year-old is set for a £16.9million move which could be completed on Thursday.

Podence had a medical on Wednesday while Wolves’ interest in AEK Athens forward Nelson Oliveira has cooled.

They have failed to meet his release clause of €6.5million after an offer of €4.5million was rejected late last week.

Wolves have signed teenage midfielder Enzo Loiodice on loan from Dijon for the rest of the season with an option to buy.

The 19-year-old France Under-20 international, who has made 24 senior appearances for the Ligue 1 club, will go straight into the Under-23s squad at Molineux.

“I’ve watched some of the Wolves games and there is a way to play here which I like, and although I know coming here is going to be difficult, I want to work hard, learn English football, play as many games as I can and then we will see what happens.”