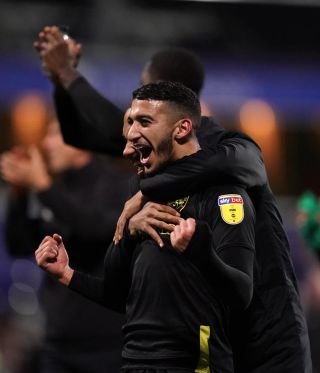 Said Benrahma’s hat-trick helped Brentford get their promotion push back on track with a convincing 5-1 victory at Hull.

Thomas Frank’s men had questions to answer following the home defeat to Nottingham Forest in midweek.

But once Benrahma scored after 12 minutes, there was only ever going to be one winner.

That was until Brentford goalkeeper David Raya inexplicably allowed Ryan Tafazolli’s misguided pass from the halfway line to squirm through his legs.

Raya’s error proved immaterial, though, as Benrahma’s brace, between which Ollie Watkins also scored, brought into sharp focus the difference in class between the two sides.

Hull have now lost their last four league games, three of which at home.

They must also now adjust to life without their best two players, Jarrod Bowen and Kamil Grosicki, who on Friday signed for West Ham and West Brom respectively.

If Hull fans arrived at the KCOM Stadium in pessimistic mood, Brentford’s early goal will not have helped to raise spirits.

The hosts were slow to react to a short corner, from which Benrahma was given time to work his way into a promising position outside of the penalty box.

Benrahma’s strike was precise, if not especially powerful, but it had enough incision to beat unsighted goalkeeper George Long.

Benrahma was again involved from a short corner, but this time the Algeria international whipped a smart cross towards Watkins.

Watkins’ downwards header was harmless, but Burke misjudged the flight of the ball which skimmed off the top his head and into the back of the net.

Just when Brentford might have put the game beyond Hull before half-time, Raya incredulously gave Grant McCann’s team a lifeline in the 29th minute.

Tafazolli turned his back in frustration as what was meant to be a pass towards Keane Lewis-Potter dribbled towards the Brentford goalkeeper.

Raya tried to control the ball with his right foot, but it ended up going through his legs and into the goal.

Tafazolli later came to his side’s rescue in a much more orthodox way when he blocked Benrahma’s attempt on the goal-line, with Long saving the resulting follow-up from Josh Dasilva.

Hull showed marginal improvement at the start of the second half, but with Bowen and Grosicki no longer on the books they lacked creativity in the final third.

By contrast, Brentford have genuine match-winners in Watkins and Benrahma.

Watkins made it 3-1 after 58 minutes when he planted a strong downward header from inside the six-yard box following Rico Henry’s outstanding, half-volleyed cross.

Benrahma then added further gloss to the scoreline with his second goal just five minutes later.

Tafazolli naively went to ground against an onrushing Bryan Mbeumo, who teed up Benrahma for an easy finish.

Substitute Joel Valencia might have added a fifth goal with two goalbound efforts which were blocked close to the line by Stephen Kingsley.

Hull were not so fortunate with five minutes remaining when Benrahma swept home from close range after Valencia’s initial strike was saved by Long.