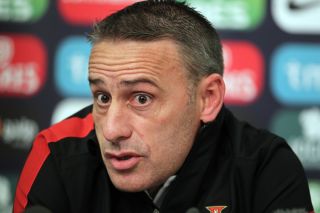 Portugal finished as runners-up in Group F, despite strolling to a 3-0 win in the final pool fixture against Luxembourg on Tuesday.

Although it was always enough to seal a place in Brazil, group winners Russia were held to a surprise 1-1 draw in Azerbaijan, leaving Bento to rue draws against Israel, particularly Friday's in Tel Aviv, sealed by a late goal after an error by goalkeeper Rui Patricio.

Portugal had beaten Russia to top the group with two games to go in July, but the 44-year-old insisted Fabio Capello's side were well-deserving of first place.

"We weren't the best team in this group," Bento commented. "The best was the one that came in first.

"Do I think we should have stayed in first? Yes. The value of the team and these players is not the issue.

"Now we have more things to think about, that mean we cannot prepare in the best way to be at the 2014 World Cup.

"Portugal will do everything to go to Brazil."

Portugal will discover their play-off opponents when the draw is made on Monday.