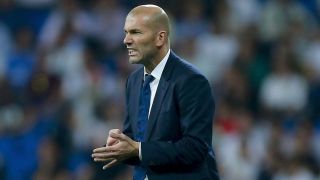 Zinedine Zidane is open to combining Karim Benzema and Alvaro Morata in attack after Real Madrid squandered numerous chances during a 2-2 draw with Las Palmas.

Morata played from the start while Benzema came off the bench to score Real's second against the islanders, but Zidane was left to rue earlier misses when Las Palmas substitute Sergio Araujo levelled the match in the 86th minute.

Gareth Bale and Cristiano Ronaldo failed to find the net despite having several opportunities and Zidane said he would analyse the causes of his side's wastefulness in front of goal.

"From the kick-off to the final whistle what we did was good. We played good football and created many chances," said the Frenchman.

"We created chances, but lacked concentration. We controlled the game, but didn't convert our chances. We deserved to win.

"You must be 100 per cent focused until the end. I will return and analyse why we couldn't score. Karim and Morata can play together."

Zidane took Ronaldo off after 72 minutes – a decision that was brought into question after Real spent the final minutes of the game trying to score a winner without the talismanic Portuguese.

But Zidane revealed the call was made with the Champions League clash against Borussia Dortmund in mind.

"I'm happy with the team's performance," he said.

"I subbed Cristiano because we play again on Tuesday. He always wants to play. Sometimes this happens in football. We just needed to convert the many chances we created.

"We deserved to win. We won't give up. There were two crucial errors that cost us the win.

"We are obviously disappointed with the result, but we're still at the top of the table and must keep fighting to maintain it.

"These things can happen. I'm not going to complain. We have an important game on Tuesday and I'll be focused on that."

He added: "When we score a late winner we are happy. I will not complain."