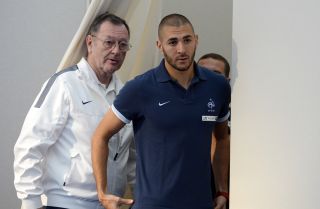 After failing to score in six La Liga matches for Real Madrid, the 25-year-old has come under fire from sections of the club’s fan base.

As he prepares to represent his national team in a crucial FIFA World Cup qualifier against Finland next week, to be preceded by Friday's friendly with Australia, Benzema has hit back at his work ethic being called into question.

"For example, when I play for France ... I run almost 10 kilometres per game. It's unfair because I do run."

"I'm a frontman. Of course I'm the first defender but I won't do the job of a full-back or a midfielder."

Benzema admits to feeling pressure due to his recent barren run, but he is confident it will not last for much longer.

"It's been the longest goal drought of my career but I work hard. It won't last for 10 years. I have chances, I just need to convert them," he added.