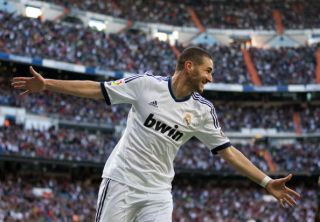 Higuain is on the brink of completing a move to Napoli that is thought to be worth €35million and the Frenchman has called on his team-mates to ensure the Argentina international's presence is not too sorely missed.

Benzema believes that youngsters such as Alvaro Morata, who scored 12 goals in 18 games for Real's B team last term, and Jese, who signed a four-year deal at the Bernabeu this week, should be given the opportunity to prove their worth regularly in the first team.

"He's (Higuain) gone and I'm going to keep working as I have been doing," the France international said.

"Now I want to prepare well. We have a good team. The theme of the signings (is) not my call.

"Morata and Jese are well prepared to do something positive. We'll see what happens. We must prepare for a great season."

The former Lyon man also hailed the work being done by a new-look coaching staff at the club, heaping praise on compatriot Zinedine Zidane and new manager Carlo Ancelotti.

"He (Zidane) gets along with everyone. He gives great advice to the players of Madrid. It is very important to us because he has won everything and he is an example to follow," Benzema added.

"He (Ancelotti) is a great coach who has many good things. He is very experienced and is good for Real Madrid."