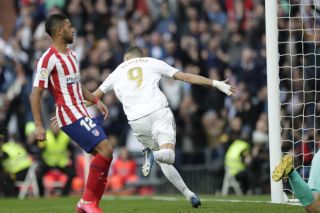 Real Madrid tightened their grip at the top of the La Liga table after a 1-0 victory over Spanish capital rivals Atletico.

Karim Benzema netted for the first time in a Madrid derby at the Bernabeu in what was to be the only goal of the contest.

Real extended their unbeaten run in all competitions to 21 games and moved six points clear of Barcelona ahead of their clash with Levante on Sunday.

The two sides last met in the Spanish Super Cup final when Real needed penalties to claim the title after a 0-0 stalemate.

This time, the visiting squad had the best of the chances in a goalless first half, but it was the hosts that almost seized an early lead after ten minutes.

Toni Kroos collected the ball from Dani Carvajal after stepping forward to take a corner and played a low pass to Sergio Ramos, whose effort just clipped the far post.

Six minutes later, Kroos seized upon another opportunity when picking up a loose ball and producing a long-range strike, but again the shot flew high of the target.

The visitors quickly responded with their own half-chance courtesy of Sime Vrsaljko, who fired a close-range effort that was kept out only by a low save from former Atletico goalkeeper Thibaut Courtois.

Atletico continued to push as left-winger Vitolo then set up Angel Correa, but his attempt bounced off the near post.

Alvaro Morata was then brought down by a challenge from Casemiro, but it was Atletico manager Diego Simeone who was shown a yellow card after animated protests at the lack of sanction for both the Brazilian and then Carvajal after a later collision with Felipe.

Correa looked free to claim the opener as the first half wound to a close, but his shot landed wide of an open goal and the offside flag was raised in any case.

Real returned from the break with a renewed energy as Federico Valverde tried his luck from outside the box, firing a shot that snuck past Stefan Savic before being parried by the hands of Jan Oblak.

The winner came 11 minutes after the break. Ferland Mendy placed a cross at the feet of Karim Benzema, who provided the finish to nudge Real in front.

Vinicius Junior had Real’s best chance of a second goal when he outmanoeuvred Vrsaljko to get to the edge of the box, but his low shot was scooped up by Oblak.

Zinedine Zidane’s squad gave themselves spome breathing room at the LaLiga summit, but Atletico remain fifth and have now not tasted league victory over their city rivals in eight attempts.