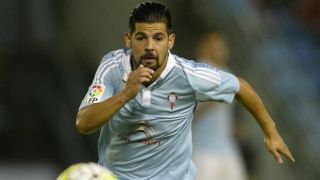 Celta Vigo coach Eduardo Berizzo said he does not know anything about the possible transfer of winger Nolito.

Barcelona are favourites to land the 29-year-old, while Arsenal are also reportedly interested in the Spaniard.

Nolito, predominately a left-winger, was on the books at Barcelona from 2008-2011 but only made five senior appearances for the club.

Reports suggest Luis Enrique is keen to bring Nolito back to Camp Nou, but Berizzo says he has not heard anything about an imminent deal.

"I have no notification from my club that the exit of Nolito is true," he told reporters after his side's 2-0 Copa del Rey win over Cadiz on Wednesday.

"It's not something new and it's not the first time I have had to answer this question.

"But if it finally does come to fruition, like I have said before we need to have the capacity to replace him."

However, Celta may already have a replacement lined up, reportedly set to land Chilean midfielder Marcelo Diaz from Hamburg.

"[Diaz] is an important player, internationally as well, and he has been playing in Europe for a while," Berizzo added.

"He is a player that is being watched. He is a top player. His signing, if the case presents itself, would be great."