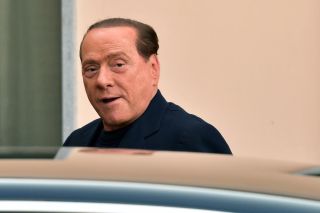 Balotelli is Milan's leading goalscorer in Serie A this season, netting 14 goals in 29 appearances with the club in eighth position ahead of the final round of the season.

But speaking to Italian station Sport Mediaset, Berlusconi said the Italy international had to improve in the attacking third.

"I want to ask Balotelli if he wants to win," said Berlusconi, who has begun working with Alzheimer patients as part of his court-ordered community service after being found guilty of tax fraud last year.

"He will say yes, and then I will tell him that he has to stay closer to the goal.

"Balotelli needs to learn how to score goals.

"Balotelli has extraordinary potential though. He is not a centre forward in our opinion, so he has to learn how to play in that role."

It has been another difficult season for the Italian giants, having failed to qualify for next season's UEFA Champions League.

Milan are also set to miss out on European football completely after Sunday's 2-1 loss to Atalanta left the club two points adrift of sixth-placed Torino, who occupy the final Europa League spot.

And the 77-year-old says he will be looking to sort out the club's future at season's end.

"The fans are not satisfied with Milan and neither am I, but the difference is that I'm the one who is putting up the money," Berlusconi said.

"We are still the most titled club in the world, and we are already working on building the future Milan.

"I'm not satisfied with how Milan are playing. Not at all. Therefore we have to reflect upon this fact."

Head coach Clarence Seedorf is also facing an uncertain future after Berlusconi refused to guarantee his position beyond the 2013-14 campaign.

"Seedorf's future? We will make a decision after the season is over," said Berlusconi, who recently claimed patients in a care home could do a better job than the Dutchman.