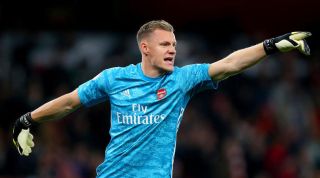 Bernd Leno has not ruled out Arsenal winning a trophy before the end of the season.

The Gunners are currently 10th in the Premier League table, 10 points adrift of fourth-placed Chelsea and just seven above the relegation zone.

However, Mikel Arteta's side are still in the FA Cup - they will face Portsmouth in the fifth round - and the Europa League.

Arsenal reached the final of Europe's junior competition last term, and will lock horns with Olympiacos in the round of 32 this time around.

And despite their mid-table occupancy in the Premier League, Leno believes Arsenal have what it takes to win silverware this term.

“Of course this process takes time but we have to win games,” the goalkeeper said.

“They are all playing for the title and the [Europa League] final was Arsenal against Chelsea, so it was a very, very big game. We want to have this final again and also in the FA Cup.

“Everybody told me that the FA Cup final at Wembley is unbelievable with the atmosphere and it is also a trophy, a title and we are looking forward to playing these games. Hopefully we can win a title this season."

Pierre-Emerick Aubameyang and Granit Xhaka were among the Arsenal players linked with the exit door in January, but Arteta succeeded in keeping his squad intact.

“Of course there are many rumours and other people talk about this,” Leno said.

“But you never had the feeling that any player was thinking about another club or wanted to leave, was refusing to train or they didn’t have the mentality in the training.

“Everybody can see we have a new manager and a new mentality. We want to build something here at Arsenal.

“You can see on the pitch all these rumours [don’t affect] these players - they are fighting, they are leading the team and this is the only way.”

Arsenal, who are currently in Dubai for a warm-weather training trip, face Newcastle in the Premier League next weekend.