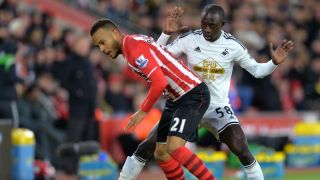 Bertrand, who completed a permanent move from Chelsea on transfer deadline day, did not have any hesitation in making the switch.

His loan stint at Southampton was the ninth of his career, and he is now looking forward to spending a lengthy period at St Mary's Stadium.

"I wanted to sign and commit somewhere instead of carrying on doing loans," Bertrand told Southampton's official YouTube channel. "When I had the chance to sign here, it was the perfect match.

"I have really enjoyed my time here in the first half of the season and I'm delighted to make it permanent. Being here, working with the manager, the players and having the supporters that we have, I can see it's a fantastic club to be at.

"Whether I'm on loan or permanent, I will give 100 per cent, no problem, but moving here gives me added incentive as well. Finally I can say this is my club and I'm proud to do that. The work starts here and I'm really looking forward to it.

"I want to keep progressing as a footballer. Hopefully we can progress as a team and go on to achieve some really great things. It's no fluke where we are in the league at the minute.

"We're playing to the best of our ability and striving to become better players. If we all maintain our hard work we can only go forward as a club."

Bertrand will hope to help his new club, who sit fourth, qualify for the UEFA Champions League - a competition he won with Chelsea in 2012.