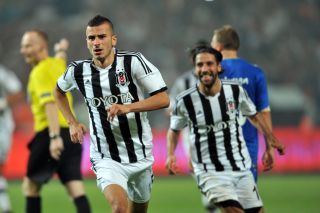 The Turkish side - who beat Norwegian outfit Tromso 2-0 (3-2 on aggregate) to reach the group stage of the competition on Thursday - were initially banned by UEFA for match-fixing offences relating to the 2010-11 Super Lig campaign.

Slaven Bilic's men had been permitted to compete in the play-off round while their appeal - which was heard on August 20 - was assessed.

However, following the decision by the Court of Arbitration for Sport (CAS), it is the Scandinavian club who will progress to the group stage, the draw for which is set to take place at 12:45 CET in Monaco on Friday.

A statement on the CAS website read: "The Court of Arbitration for Sport (CAS) has dismissed the appeal filed by Besiktas JK against the decision taken by UEFA to exclude it from the European Europa League 2013/2014.

"Due to the urgency of the matter, the CAS Panel has issued its decision without the grounds. The full, reasoned award will be issued as soon as possible.

"Pursuant to the UEFA decision, which is now confirmed by the CAS, Besiktas JK is excluded from the UEFA Europa League 2013/14."

Besiktas are the second Turkish side to be banned from the competition after Istanbul rivals Fenerbahce - who dropped into the tournament after being knocked out of the UEFA Champions League by Arsenal in the play-off round - had their suspension from this season's Europa League and next season's Champions League upheld by the CAS.