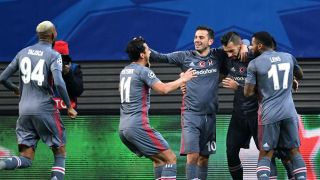 Besiktas will need a "miracle" to progress to the Champions League quarter-finals at Bayern Munich's expense, says Hamit Altintop.

Besiktas were seeded for the last 16 but drew the short straw against the runaway Bundesliga leaders, who finished second behind Paris Saint-Germain in Group B.

Former Bayern and Turkey midfielder Altintop believes Besiktas have the requisite skill to compete in the Champions League, but expects the greater continental experience at Jupp Heynckes' disposal to prove too much.

"Besiktas' style is joyful to watch and they are very productive offensively," he told Omnisport. "It boosts their confidence to be the top seed, but I think it is also dangerous for them. It takes skill and experience to handle this kind of atmosphere.

"We should put an emphasis to that they are an inexperienced team in Champions League. The opposition is Bayern, a team which is playing in this competitive level for many years.

"If they score an away goal, Besiktas can create a miracle at home if they stay humble and lower their expectations. I think miracle is the correct word if Besiktas manages to eliminate Bayern.

"With their passing game and high pressure, I compare Besiktas with Arsenal.

"But Arsenal conceded 10 goals against Bayern last year, which should not be ignored. They can definitely achieve a victory, but it must be their day."

Heynckes on the draw: "I obviously know well. It will be a tricky tie, we will need to be on our game both games." 12 December 2017

Altintop believes Bayern are firmly among the favourites to lift the trophy this season after a resurgence under Heynckes, although tipped another of his former employers as most likely.

"Bayern has 56 points in 22 matches in Bundesliga, and they only dropped points against PSG," he added. "Bayern is the second favourite team in the competition, after Real Madrid.

"Real has won the last two trophies, and Bayern advanced to the final twice in the last eight seasons.

"With this approach, you can see the level and history of this team more clearly. I think such club deserves more respect."