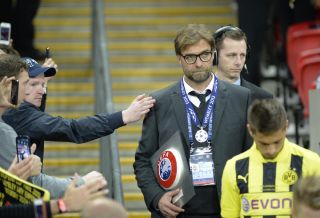 Klopp's side finished second in the Bundesliga to Bayern Munich before also losing the UEFA Champions League final to the Bavarian giants.

While Dortmund have since lost playmaker Mario Gotze to Bayern, they have added the likes of Henrikh Mkhitaryan and Pierre-Emerick Aubameyang and Klopp is confident his side have not yet hit their full potential.

"I don't think you should compare one team with another similar team, because we are just not the same team. We still don't have a clue how well the team can play, we still have to show that."

Dortmund, who have won all four of their Bundesliga games so far this season, and have been drawn in a Champions League group alongside Arsenal, Marseille and Napoli this time around.

Klopp believes it would have been "crazy" had they won the competition last term, but insisted his team have a chance of going one better this time around.

"I think we would have lost our minds thinking about how it (winning the competition) could be possible. Only a few lads thought they would become Bundesliga players, and five years later they managed to become domestic champions twice and win the German Cup once," he continued.

"To have then become Champions League winners, that would have been an incredible story - I would have loved to watch that story if it was a movie."