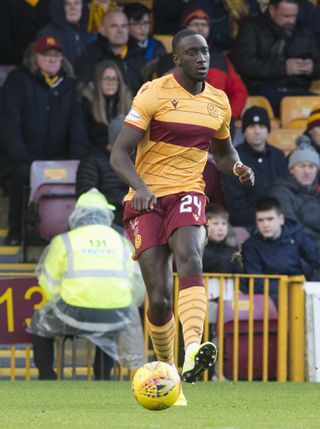 Bevis Mugabi scored his first Motherwell goal as Aberdeen’s six-match winning run came to an abrupt end with a 3-0 defeat at Pittodrie.

Mugabi enjoyed a turnaround in fortunes after being sent off in Motherwell’s midweek Europa League win over Coleraine, heading the visitors three ahead midway through the first half.

Aberdeen played a major part in their own downfall as Mark O’Hara and Christopher Long both netted in the opening eight minutes.

The first-half performance was an alarming glimpse of life without Scott McKenna, who was left out of the squad after the Dons received a major bid for the defender, thought to be from Nottingham Forest.

Motherwell began the weekend bottom of the Scottish Premiership but they confidently held on to their lead to make it a hat-trick of victories with Trevor Carson not having a save to make, although Marley Watkins hit the post for the hosts.

Both sides were in between Europa League games and rested a couple of players with Tommie Hoban and Dylan McGeouch dropping to the bench for the hosts and Nathan McGinley and Callum Lang making way for Motherwell.

The visitors got off to a flying start in the fourth minute with a helping hand from the home side. O’Hara netted from the spot inside four minutes after Watkins had handled Mugabi’s header following Liam Polworth’s free-kick.

Long then gratefully received a scuffed clearance from Dons goalkeeper Joe Lewis and had plenty of time to stroke the ball into the net.

The third came in the 22nd minute when Mugabi met Polworth’s corner with a header from six yards out and Lewis could not keep it out.

Motherwell looked like they could do more damage with Allan Campbell bursting forward from midfield and space on the counter-attack, and Long had the ball in the net again after a flowing move but was flagged offside.

The visitors had dealt with a couple of dangerous crosses from Jonny Hayes but Aberdeen’s first serious threat came in the 41st minute when Marley Watkins headed Andrew Considine’s cross off the post.

Aberdeen unsurprisingly made changes at the break as Hoban and Shay Logan came on to join their back three and Ross McCrorie moved forward into midfield. Niall McGinn and Ash Taylor lasted 45 minutes following their recalls to the team.

Motherwell had let slip a two-goal half-time lead at Coleraine on Thursday after conceding the first of two penalties early in the second half but they never looked like folding again as they managed the game well.

Polworth shot over following a Motherwell counter-attack and Watkins fired over from the best of Aberdeen’s scarce opportunities.