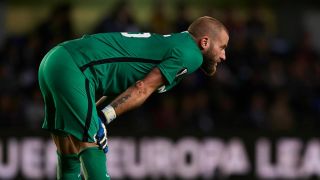 David Bicik apologised for a mistake in the "worst moment" after his Sparta Prague side were beaten 2-1 at El Madrigal in the first leg of their Europa League quarter-final on Thursday.

Bicik's clearance was charged down by Cedric Bakambu for the opening goal inside three minutes, with the striker then scoring the winner after Jakub Brabec levelled on the stroke of half-time.

Sparta's goalkeeper made amends with a series of fine saves, including denying Bakambu his hat-trick with a late block, but he was contrite when speaking to the press after the match.

"I am sorry for my mistake, there's no excuse for that," Bicik said.

"I made a wrong first touch then did not see the player.

"I know I made a few saves then, but still I am sorry for the mistake that came in the worst moment."

Coach Zdenek Scasny felt Villarreal were the best side Sparta have faced in the competition this season.

"Villarreal are the strongest team we met in our Europa League season," Scasny said after his side's unbeaten run in the competition came to an end. "We saw they wasted a lot of chances.

"We conceded a stupid goal right at the beginning, but we had to cope with it and play on."