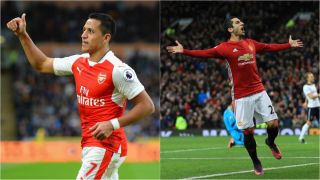 One of the most unpredictable transfer sagas in recent years is over. Alexis Sanchez's future has been clarified.

The Chile international looked destined to join Manchester City before the season started and was on the verge of a £60million move at the end of August, only for Arsenal to pull the plug at the last minute having failed to sign a replacement.

With Sanchez's deal up at the end of the season, rumours continued to suggest a pre-contract agreement had already been struck with City and, when January started, his move to the Etihad Stadium seemed to be a formality, as Pep Guardiola prepared to reunite with a player he coached at Barcelona.

But, Manchester United have swooped in under the radar and exploited Sanchez's desperation to leave Arsenal by blowing City's offer out of the water, while also meeting Arsenal's needs in the shape of a rare swap deal involving Henrikh Mkhitaryan.

Which club is getting the better end of the bargain? Omnisport writers Joe Wright and Ryan Benson argue the toss...

Jose Mourinho got three of the four signings he wanted in the last transfer window. The one that got away was an attacking player, comfortable on the wing, who would effectively guarantee United would score enough goals to make those ghastly 0-0 draws at Old Trafford a thing of the past.

Last year, the wanted man was Ivan Perisic. Now, it's Alexis Sanchez. The Chilean will command a lower transfer fee than the Inter winger, is a more versatile player, a greater goal threat, and someone whose move will weaken one top-four rival and stop Manchester City from landing a priority signing. It's not just a great deal for United; it's one that, if missed, should lead to serious questions about the club's operation.

United are being quoted fees in the region of £35million for Sanchez. This is scandalous for some, because his contract expires at the end of the season. So what? This is a world-class forward, who will undoubtedly make their team play more effective, more exciting football, available for £10m less than Everton paid to get Gylfi Sigurdsson. The fact that City have baulked at Sanchez and his agent's demands does not mean United should do likewise. Chucking money they have at their disposal to get Sanchez now, on a wage to make him happy, denies the rest of the world's top clubs the chance to tempt him with a similarly spectacular salary come June.

Consider that Arsenal and City are being linked with a £23m bid for Jonny Evans, a 30-year-old centre-back who has less than a year-and-a-half left on his contract. Consider, too, the impact Sanchez's arrival will have on a United dressing room that is fighting to be deemed relevant while their local rivals scamper towards the title. This is like Robin van Persie's arrival in 2012, except Sanchez (you'd assume) will remain an elite player after 12 months of his career in the north west. It's a £35m steal.

It's a shame for Mkhitaryan; the Armenian has worked hard for chances under Mourinho and shown flashes of excellence. Well, flashes are not enough. Mkhitaryan has been given ample opportunities to show he can sustain good form in the first team, and he has failed to take them. Right now, he is a long, long way from the level that made him the best player in the Bundesliga two seasons ago. He is only a year younger than Sanchez, too: banking on him to recapture his best, after 18 tough months in England, might be a gamble Arsenal are willing to take but it's not one United should consider if there is a better alternative.

And what an alternative they have found.

It's difficult to argue that Arsenal have handled the situation around Sanchez's departure particularly well. The fact that losing someone so talented for free looked like becoming a possibility even for a second is an absolute farce. That they're in the exact same scenario with Mesut Ozil right now as well is astounding.

But, you can't say that Arsenal are not making the best of a bad hand with respect to Sanchez. It seemed to be a given that Manchester City would secure his signing one way or another this month, but playing hard ball with the Gunners, and the Chilean's entourage, opened the door for United, who have been able to offer an ideal arrangement straight away.

Henrikh Mkhitaryan has been tipped to play a key role in 2017/18, beginning tonight in Macedonia. 8 August 2017

Henrikh Mkhitaryan going the other way means Arsenal immediately have a ready-made replacement, undoubtedly taking some of the hassle out of the usual process of bringing a player in. Granted, the Armenian will probably be the first to acknowledge that we have seen his very best all too infrequently in the Premier League, but he's by no means a lost cause and clearly has talent.

One of the main reasons for Mkhitaryan's struggles at United has been a philosophical difference with Jose Mourinho, according to some reports.

The 28-year-old initially struggled to get into Mourinho's plans at the start of last season, while speculation about a rift in November last year resulted in a prolonged absence from the first team for Mkhitaryan, who is said to have contrasting views with his coach about how the game should be played.

At Arsenal, however, it's difficult to imagine such a difference of views becoming a problem under Arsene Wenger, a manager who has always employed a freer approach than that of the Portuguese pragmatist. Once his move to move to the Emirates goes through, Mkhitaryan will find himself in a team far more suited to his creative talents and will likely have more opportunities to expressive himself on the pitch, potentially reigniting the talent that lit up the Bundesliga two seasons ago, especially if former partner-in-excellence Pierre-Emerick Aubameyang pitches up too.

With that in mind, Arsenal are ridding themselves of a player who has been accused of downing tools this season and bringing in a talented replacement who is suited to their brand of football and has something of a point to prove. United, on the other hand, are adding another forward who could prove detrimental to the development of Marcus Rashford and Anthony Martial while also paying over the odds.

When you consider that Arsenal could've lost Sanchez for nothing and that the deal will reportedly end up costing United a reported £180m over the course of Sanchez's stay, the Gunners are getting the better value.

Our no.17 is also pleased Mkhitaryan is back in the squad: "He's a great player with many qualities - it's a pleasure to play with him." 8 March 2017