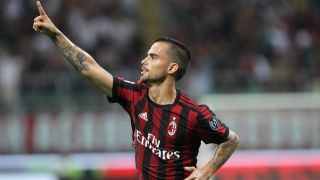 AC Milan attacking midfielder Suso can be the Lionel Messi of Sunday's derby against Inter, according to team-mate Lucas Biglia.

Vincenzo Montella's side face their city rivals at San Siro needing a victory to kick-start their season and reduce some of the pressure on the head coach.

Inter are seven points ahead of Milan in the Serie A standings and just two behind leaders Napoli, having won six and drawn one of their opening seven matches.

A victory for Luciano Spalletti's side would leave Milan's hopes of a Champions League push looking slim even at this early stage of the season, with the top three already beginning to pull away.

Biglia started Argentina's 3-1 World Cup qualifying win over Ecuador on Tuesday, in which Messi scored a brilliant hat-trick to snatch an automatic qualifying spot for next year's finals in Russia.

And the 31-year-old has urged Suso to become the same inspirational figure in Sunday's key game.

Asked by La Gazzetta dello Sport who could be the Messi of the derby, he replied: "Suso.

"I don't want to put pressure on him but he has to start to realise that, when you have greater quality, you need to make it available."

Biglia also backed Andre Silva to emulate a Milan great after his strong start to life in Italy following his €38million move from Porto.

"Andre Silva can become a champion with the way he works and with his mentality. Let's just say he has the qualities to potentially become like [Marco] Van Basten," he said.

Biglia also insisted Montella has the full support of the squad, adding: "He's a great person and a great coach. You shouldn't believe that it's easy for a coach to put 11 new players together. We're all 100 per cent with him."