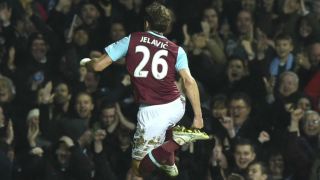 West Ham manager Slaven Bilic has revealed his joy for countryman Nikica Jelavic, after the Croatian striker finally opened his account in the FA Cup against Wolves.

Jelavic settled the third-round tie on Saturday with a late strike to put West Ham through to the fourth round, as Wolves started life without striker Benik Afobe, who was withdrawn to finalise his £12million move to AFC Bournemouth.

Former Croatia international Jelavic took his chance on the half-volley perfectly after being set-up by fellow striker Andy Carroll and the popular forward was mobbed by team-mates following his goal.

"All the players and staff are extremely glad," said Bilic.

"I’m a little bit biased because I've known him since he was 15 and in the academy of Hajduk Split, my home team.

"He is really well respected and almost adored at the club because of the work-rate he puts in, every second of every training session, his professionalism on the pitch and off the pitch.

"His relationship with the players is great and they are all delighted he scored the goal."

The 30-year-old had not made the best start to his West Ham career prior to the goal, playing just 215 minutes in the Premier League, with just one of his nine league appearances coming as a starter.

But Bilic believes the goal might be just the tonic Jelavic needs to return to his goalscoring best.

"I don’t know how many times me and my staff have told him is not only about goals, but you know strikers, they are always thinking, ‘When am I going to score the first goal?’," Bilic added.

"So it is extremely important for him to score this goal and open the locker - especially in the FA Cup. It's going to boost his confidence. That’s why it’s important he scored."