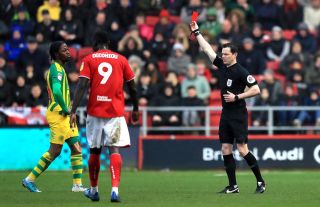 West Brom boss Slaven Bilic blamed the reaction of Bristol City head coach Lee Johnson and his staff for the dismissal of Romaine Sawyers during his side’s 3-0 win at Ashton Gate.

Callum Robinson set the Championship leaders on course for a comprehensive victory after 32 minutes, the rebound bouncing in off his head after his shot had been blocked by advancing goalkeeper Dan Bentley.

Hal Robson-Kanu doubled the advantage from close range four minutes later following a Bentley error and the Wales striker capitalised on a 79th-minute mistake by Ashley Williams to wrap up a convincing win.

Sawyers picked up a straight red card after 77 minutes when appearing to grab Jamie Paterson by the throat after being fouled by the City substitute.

Bilic made his fury over the decision clear and there were some angry exchanges between the rival benches.

But he played down any bad feeling at the final whistle, saying: “There was no problem and I shook hands with Lee.

“If you ask me if I liked his reaction to the incident involving Romaine, I would say no, but maybe in his position I would have done the same.

“I sympathised with Romaine because he is not the sort of player to earn a ban for being too aggressive.

“I’m told he and Paterson have known each other for years. When he grabbed him it was just to say ‘what are you doing?’ because he had been fouled several times from behind.

“Sometimes referees need to look at the whole package when dealing with an incident. I would have said the same if one of their players had done what Romaine did.

“If that was a red card, we have going to have so many. It was the reaction of their bench that brought about the sending-off, but we are not Dalai Lamas in football so I understand it.

“It had to rank as one of our most complete performances of the season. To come here and win 3-0 against opponents in their position was fantastic and we managed the game so well.

“The lads looked sharp and determined in training this week so I just told them to go out and play the same way.”

Johnson did not attend his press conference until an hour and a half after the game had finished.

Then, he said: “Slaven is wrong if he attributes the sending-off to our reaction. If someone put his hands around one of my player’s throats, of course I am going to be angry.

“It was a clear red card. All I did was to draw the fourth official’s attention to what had happened and amazingly he hadn’t seen anything.

“Then the linesman got involved and clearly he had seen the incident so the right decision was made.

“There were no problems at the end. I always try to shake hands with the opposition manager and it happened today.

“My only complaints are with my own team. For 15 minutes it was a game and then we made so many errors against a good side that we couldn’t expect to win.

“There was an error for the first goal, two for the second and a howler for the third.

“They had that bit more physical strength in key areas and that comes from the sort of signings you can make with parachute payments.

“We had to be right on our game and it didn’t happen. But we will go again and keep fighting to get in those play-off places.”