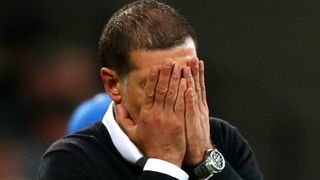 Slaven Bilic wanted more from his wide players after West Ham registered just one shot on target in their 0-0 draw with West Brom.

Despite lining up with a strong front three of Andy Carroll, Javier Hernandez and Michail Antonio, the Hammers found the hosts difficult to break down and Bilic admitted his side lacked quality in the final third.

The result at The Hawthorns means West Ham have won just one, drawn four and lost six of their last 11 away games in the league, while they also have only one victory from five Premier League matches this season.

Bilic did praise his defence for keeping West Brom at bay, telling the West Ham website: "It has not been a great game of football, but we were solid again and limited them to one chance in the game.

"Especially in the second half, we were dominant and much better than them and coming into those really good areas, still keeping the shape and all that.

"To be fair, we looked to get more and that was three points and you have to say the quality in the last third was missing, either with a cross or a reaction from a cross or something, or when we had good one-on-ones in the last 20 minutes, when they opened a little bit.

"We needed one of our players, especially our wide players one-against-one in wide positions, to do a bit better."

A hard-earned away point and another clean sheet.September 16, 2017

Bilic agreed with referee Paul Tierney's decision not to show West Brom's Ben Foster a red card for a lunging challenge on Hernandez in the second half.

"To be fair, it looked to me to be a red card, but when I saw it again I can't blame the referee," he said.

"He didn't do anything wrong there because of two things – one, Foster wasn't last man because two players came behind, and second, that challenge was mistimed and it wasn't that brutal, so fair enough.

"Fair enough, it didn't have to be red, but a lot of times I've seen red for that, especially when you play at home, to be fair."

Bilic said the result, along with a 2-0 win over Huddersfield Town in their previous game, represented an upturn in form going into the EFL Cup tie at home to Bolton Wanderers.

"It's been a good week for us," he said. "We were hoping we would get three points, but to get another clean sheet and a point away from home, you can't be too negative about it."