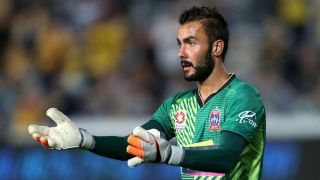 Swansea City have completed the signing of Australian goalkeeper Mark Birighitti on a free transfer.

The 25-year-old - swapping New South Wales for south Wales following the expiry of his Newcastle Jets contract - arrives at the Liberty Stadium on a two-year deal.

Birighitti, who has one international cap to his name, joins Kristoffer Nordfeldt and Gerhard Tremmel in providing competition to first-choice keeper Lukasz Fabianski.

"Before coming here I knew there would be strong competition at the club," he told the club's official website. "Kristoffer is a very good goalkeeper and Gerhard is too.

"Watching the Euros back home in Australia, I saw Lukasz have a fantastic tournament [for Poland]. He was probably one of the best goalkeepers in the tournament.

"But my plan is to take each training session as they come and try to be better than them. I have to make sure when the opportunity comes that I take the opportunity with both hands and don't look back."