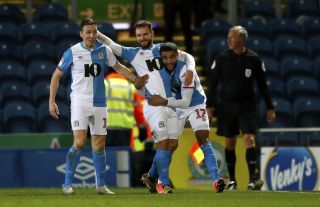 The game looked to be heading for a draw, despite gilt-edged chances for Rovers striker Adam Armstrong and Jackson Irvine’s effort that cannoned off the woodwork at the other end.

But Tony Mowbray’s side turned the game in their favour in clinical fashion in the final 17 minutes. Darragh Lenihan broke the deadlock by turning home his third goal in five games following a 73rd-minute goalmouth scramble.

They went for the jugular and Armstrong marked his 150th career league start with a stunning 25-yard strike in the 79th minute before Dominic Samuel pounced on an error from goalkeeper George Long to net his first league goal since November 2017 a minute later.

Victory ensured Blackburn bounced back from their home defeat to Fulham in style and they have now won three of their last five. For Hull, in contrast, this was a fifth defeat in six.

Blackburn should have been ahead in the opening seconds after defender Sean McLoughlin completely missed his clearance, leaving Armstrong one-on-one with the keeper, but Long spread himself brilliantly to block.

Marcus Maddison forced a smart save from Christian Walton at the other end before Tigers skipper Irvine planted a free header over.

The hosts looked more dangerous, though, and Long had to produce a fine reflex stop to palm away Bradley Johnson’s powerful header midway through the half.

Hull were indebted to Robbie McKenzie just before the break after he blocked Armstrong’s 12-yard shot, Ryan Nyambe’s pinpoint cross having picked the striker out.

Grant McCann’s side nearly broke the deadlock just after the break through Irvine’s precise curling effort that rebounded off the crossbar, but Armstrong continued to looked dangerous, sprinting half the length of the field before his rasping drive was deflected into the side-netting.

Rovers finally broke the deadlock when Lenihan pounced to poke the ball home after Long had saved Johnson’s point-blank header.

Armstrong got the goal his performance deserved and it was one to remember as he engineered space 25 yards out before letting fly with an unstoppable drive that flew into the top corner.

The Tigers fell apart and conceded again a minute later when Long’s poor clearance was collected by Samuel who finished clinically into the bottom right corner.

Armstrong almost netted a fourth late on, but Long tipped over his free-kick.