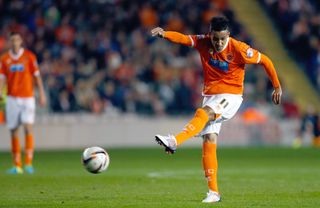 The England Under-21 international was a target for Swansea in the last transfer window, but remained at Bloomfield Road.

The Welsh club's chairman, Huw Jenkins, revealed at the weekend that Swansea had made another attempt to sign the highly-rated winger.

And Paul Ince told the Blackpool Gazette: "It won't just be Swansea who come in.

"When you see him playing like he did on Saturday (during a 2-1 FA Cup defeat to Bolton), he's going to get attention from other clubs.

"I thought that was Thomas back to his best. He was on a different level."

Blackpool may be tempted to sell their young star this month, given his contract expires at the end of the season.

The Championship side would be able to claim compensation should Tom Ince depart in the summer, but are likely to secure a higher fee by accepting a bid in January.

Paul Ince added: "Thomas' performances haven't been great lately, but nobody's have. It was great to hear the fans sing his name on Saturday.

"He just wants to play well for this club and on Saturday he looked like he was enjoying his football.

"Whether he's here after January or until the summer, who knows?"