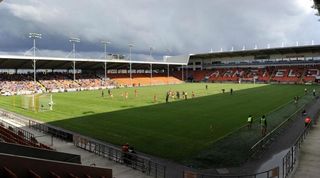 Relegated Blackpool's final Championship game with Huddersfield Town was halted after protesting fans invaded the pitch at the start of the second half.

The Lancashire club have long been consigned to the drop following a season that has been dominated by the supporters' stormy relationship with chairman Karl Oyston.

And sections of the home crowd used the last match of the campaign as a platform to voice their frustrations at his running of the club, racing onto the Bloomfield Road pitch and settling in the centre circle.

The fans also set off flares, with police and stewards in attendance.