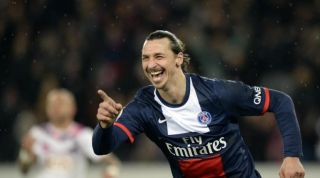 Ibrahimovic has been unavailable for PSG since picking up a hamstring injury in their UEFA Champions League quarter-final first-leg clash with Chelsea at the start of the month, missing the last four games.

The Sweden international has also been absent because of a family bereavement, but has now returned to the French capital.

And Blanc is hopeful that the Ligue 1 leaders' top scorer can return to action before the campaign comes to an end.

"Our goal is that he can play again before the end of the season," Blanc said ahead of PSG's game with struggling Evian on Wednesday.

"There is always the danger of relapse. We'll know more at the end of the week

"I believe that he will be able to play before the end of the season if there are is problem with his injury. We will take no risks."

Blanc came under fire following PSG's exit from the Champions League, which saw his side throw away a 3-1 first-leg lead over Chelsea.

The 48-year-old expressed his desire to extend his contract following Saturday's Coupe de la Ligue final triumph over Lyon, but was coy when pressed on the issue on Tuesday.

"What is said with the directors, I keep to myself," Blanc added. "I hear what is being said, but I do not read the press.

"I know what is said with the directors, that is what matters to me. Wait a little bit."