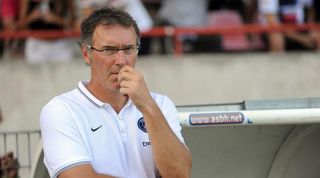 The champions saw Yohan Cabaye sent off on a frustrating night at the Parc des Sports, as Evian again proved difficult opposition for Blanc's men.

Missing talismanic striker Zlatan Ibrahimovic, the visitors struggled to fashion too many opportunities and even came under late pressure from an Evian side who had shipped nine goals in their previous two league games.

Blanc explained Cabaye's absence for much of the second half had hampered his team but acknowledged a draw was a fair result.

"This point is deserved by Paris and Evian. We did not quite create enough dangerous situations to win so it's a little bit of mixed feelings.

"But there is no need to worry."