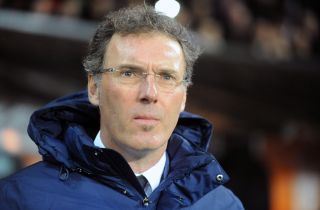 An injury to Adrien Rabiot has left Blanc short of numbers in midfield for the second half of the season and finding reinforcements is top of his priority list during the January window.

The 18-year-old Rabiot damaged his medial knee ligaments during PSG's Coupe de la Ligue victory over Bordeaux and is now set for several months on the sidelines.

Paul Pogba and Yohan Cabaye have both been linked with a move to the French capital, but Blanc refused to be drawn on who was top of his wish-list - although he did admit that Newcastle man Cabaye is a player he admires.

"It would be good to recruit a player in the heart of the game, and have an extra player in midfield," the PSG coach told Canal Plus.

"We need a player who has the same mentality as the others when they are playing or on the bench.

"He must be technically good and be tough, and whether this player comes or does not come, there will be competition in all positions.

"The injury to Adrien makes it more urgent to have an extra player in midfield.

"He (Cabaye) has that character, but there are others."