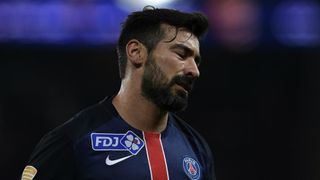 Laurent Blanc and Paris Saint-Germain are seemingly prepared to lose Ezequiel Lavezzi for nothing in the off-season after ruling out a January move for the Argentine.

Lavezzi will be a free agent at the end of June when his contract with the French champions expires, unless the club and player can come to a new agreement.

But a new deal to remain in the French capital seems unlikely, with the Argentina international heavily linked with a return to Italy, which is reportedly his preferred destination according to his agent.

Lavezzi joined PSG from Napoli in 2012 for almost €30 million and has made over 150 appearances for Blanc's team, but the French coach will not be tempted to try and recoup some of the investment made in the forward by selling him in the current window.

"I don’t want to tell you what we said but we have been very clear with him, from the beginning of the season until this transfer window.

"We have been very clear on his situation. He cannot say the contrary. We all know that if someone wants to leave the club, all the parts of the club must agree. Apparently, it is not the case, because he hasn't move."

Blanc said the club would not be held to ransom just because Lavezzi's contract ends in six months.

"The contract of 'Pocho' ends in June and there is a strategy. Well, not really a strategy, but there is a position to stand, hold or keep," the Frenchman continued.

"We have had discussions with players at the end of their contracts. We spoke with them and we told them that we could adapt to their positions if we found satisfaction."

The PSG coach has plenty to occupy his mind outside of Lavezzi, with the French champions 21 points clear of next-best Monaco in the Ligue 1 standings, while still competing in the Coupe de la Ligue, Coupe de France and Champions League.

PSG take on Chelsea when the latter resumes in February, and Blanc said his team would continue to fight in all competitions.

"If you begin to think about the injury, about not giving 100 per cent in some duels, it’s the best way to get injured or to not being present the D-day. I said that to my players. So, yes there are risks. But there are always risks. Zero risk doesn’t exist.

"I think that we have lots of games, maybe too many, before Chelsea – I would have loved to play a bit less. We’ll play them all but please don’t be focused on this game cause it’s the best way to get troubles."