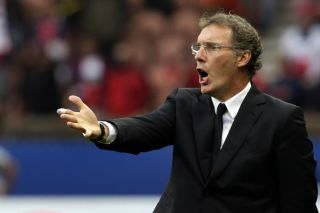 Blanc's side cruised to an easy victory against their Portuguese counterparts on Wednesday, striker Zlatan Ibrahimovic scoring a brace, while Brazilian defender Marquinhos also found the net in what was an excellent display by the Ligue 1 champions.

The win leaves PSG top of Group C with maximum points from their first two games as they aim to improve on their run to the quarter-finals in the last campaign.

The former France manager was full of praise for his team, but stressed that that they can still perform to a higher standard.

"The perfect match? The scoreline is perfect and the three points are secured," he told Canal+.

"In the analysis of the game, we can always do better, but we had control from the first to the 90th minute.

"This is what the players are asked and it is very satisfying."

Blanc was full of admiration for Ibrahimovic, who he feels saves his best for the Champions League.

"Big players, the Champions League makes them salivate," he added.

"He is hyper motivated in this competition. It was very good. He, like all the others, played a great match."