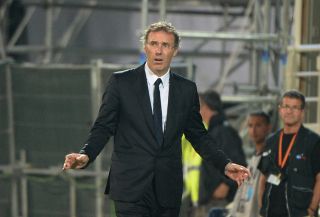 A second-half strike from Edinson Cavani and late goal from Blaise Matuidi was enough to secure a point for Blanc's men, as they fought back from 2-0 down to extend their unbeaten league run to 11 games.

Despite being frustrated for much of the game against a spirited Saint-Etienne side, Blanc says he still found the time to enjoy the occasion.

He told Canal+ after the game:  "The match was difficult for PSG, the technical staff and the coach, but contrary to what you might think I actually had a good time.

"Paris needs to understand that it is a good thing that we can still meet teams such as Saint-Etienne."

Despite his own personal experience, Blanc was unhappy with his team's defensive display.

He added: "Tonight we gave two goals away to Saint-Etienne with two defensive errors.

"Paris did not do enough to win the game and, with the game they had, Saint-Etienne deserved at least a point."