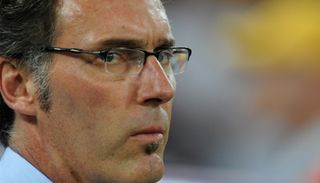 The 47-year-old Blanc, out of a job since departing as France coach after their Euro 2012 quarter-final exit, led Girondins Bordeaux to the French title in 2009.

"Paris Saint-Germain is delighted to announce the appointment of Laurent Blanc as coach for the next two years," PSG said in a statement.

Blanc will begin work on Monday for the start of the pre-season training.

The former France international sweeper replaced Ancelotti, who said last month he wanted to leave the club after leading them to their first French title since 1994. The Italian agreed to join Real Madrid on Tuesday.

Blanc, who played for Montpellier, Marseille, Manchester United, Barcelona and Inter Milan, was part of France's World Cup-winning squad in 1998 and won the last of his 97 caps in the 2000 European Championship final victory against Italy.

But he was not PSG's first choice, according to media reports.

Owners Qatar Sports Investments (QSI) have spent over 200 million euros on transfers since taking over the club two years ago, recruiting the likes of Sweden striker Zlatan Ibrahimovic and Brazilian defender Thiago Silva in pursuit of a Champions League victory within five years.

Blanc, whose European coaching experience is limited to two seasons with Bordeaux, will have to deal with QSI's high expectations.

"The mission Paris Saint-Germain's management has assigned Laurent Blanc is to continue the work initiated last year and lead the team towards the European heights," the statement said.

The Frenchman, who earned the nickname "The President" during his playing days, will also have to prove he can handle a squad full of characters after failing to keep France's bad-tempered players under control at the European Championship.

The list includes PSG forward Jeremy Menez who was banned for one game by the French Football Federation for insulting a referee.

The representatives of Brazil captain Silva and Ibrahimovic appear to have supported the appointment, saying the most respected players in PSG locker-room back Blanc.

"Laurent Blanc can't be a wrong choice. He was France coach, he's equal to all the names that have been cited. They are all great coaches," Silva's agent Paulo Tonietto told French weekly Le Journal du Dimanche.