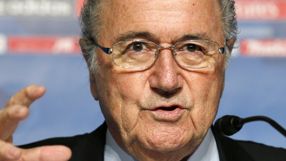 Ghanaian midfielder Kevin-Price Boateng led his team-mates in a walk-out of a friendly match in Italy on Thursday in a gesture widely praised by players and politicians.

Milan president Silvio Berlusconi later said the team would leave the field of play whenever they suffered racist abuse but Blatter, speaking to Abu Dhabi's The National newspaper on Sunday, indicated that was not the answer.

"Walk off? No. I don't think that is the solution," said the Swiss, adding that the Italian federation had yet to provide FIFA with a full report.

"I don't think you can run away, because eventually you can run away if you lose a match," he added. "This issue is a very touchy subject, but I repeat there is zero tolerance of racism in the stadium. We have to go against that.

"The only solution is to be very harsh with the sanctions - and the sanctions must be a deduction of points or something similar."

Blatter, who is on a tour of the Middle East, said Boateng's action was a reminder to spectators that they must behave at matches.

Milan were playing lower division side Pro Patria when Boateng stopped playing in the face of abuse, collected the ball and kicked it towards the stands. He then took his shirt off and walked away, followed by his team-mates.

Blatter last November described racism in football as "a devil" after being criticised in 2011 for denying it was a problem in the sport and saying any incidents could be settled with a handshake.