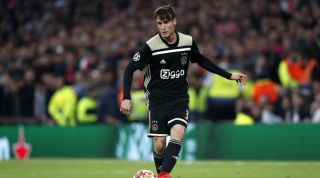 The left-back has been one of the key figures behind his team’s surge to the semi-finals of the Champions League, where they beat Tottenham Hotspur 1-0 in Tuesday’s first leg.

Arsenal and Atletico Madrid are among the teams who have been credited with an interest in the Argentina international, but he appeared on Ajax’s social media channels on Friday to assure fans he will still be in Amsterdam next season.

“I want to tell you that I will stay for one more season.

“Hopefully it will be a great year, like it is this year. A hug to all of you.”

The 26-year-old has made 42 appearances in all competitions this season, scoring five goals.