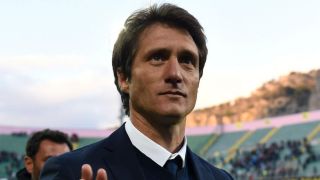 Guillermo Barros Schelotto is unconcerned by the deficit Boca Juniors need to overturn in the second leg of their Copa Libertadores semi-final tie against Independiente del Valle at La Bombonera on Thursday.

Boca took a 1-0 lead through Pablo Perez in the altitude of Quito last week, but a second-half fightback means Independiente take a 2-1 advantage to Buenos Aires.

Bryan Cabezas and Jose Angulo – both of whom were included in the preliminary Ecuador squad for the Copa America Centenario but failed to make the cut – scored the goals to put Pablo Repetto's team on the brink of history.

However, the Boca coach is remaining calm and hopes his players do the same as they seek a place in the final for the first time since 2012.

"We have 90 minutes to score one goal, not 15. Take the example of how Atletico Nacional managed to turn the tie against Rosario Central," said Barros Schelotto, referring to the Colombian side's progression from the quarter-finals despite losing the first leg 1-0.

"They were down in the score and won in the return leg, playing calmly throughout. They were playing neatly on the pitch, without going crazy. That will be the idea.

"The pitch is good. Obviously the fact we are playing at sea level will benefit us."

La Bombonera is a notoriously difficult place to go, with its steep stands and boisterous crowd combining for an intimidating atmosphere.

However, Independiente are unlikely to bow to such pressure.

The Ecuadorians held Colo Colo to a goalless draw away from home in the group stage and stifled defending champions River Plate at Estadio Monumental in the last 16.

Independiente were playing in their national third tier less than a decade ago, but defender Arturo Mina insists the situation is not going to their heads.

"We are one small step from making history, but we are calm. It is a young team, but with a winning mentality," he said.

Fernando Tobio (knee) remains absent for Boca, but the Argentinian side will be relying on the likes of Nicolas Lodeiro and Carlos Tevez in the fight to reach the final.