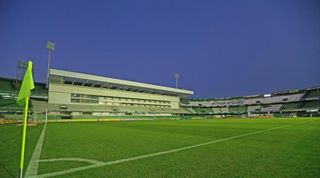 Mauricio Soria's side replaced Wilstermann at the summit after the latter were held to a goalless home draw against Bolivar.

Blooming won their first three matches of the season and have maintained their momentum despite their very poor efforts last term.

They finished bottom in the Clausura and only ninth in the Apertura, making their run this campaign surprising.

They did need two goals in the last 25 minutes to get their one-point lead atop the Apertura table, though, after Cristian Diaz's header cancelled out Sergio Almiron's first-half penalty.

Diego Torrico rifled in a superb left-foot effort from 12 yards in the 65th minute to restore Blooming's advantage.

Real Potosi could have taken the league lead with a home victory against Petrolero Yacuiba on Monday.

Instead they were beaten 3-2, though, meaning they stayed fourth.

Rock-bottom Universitario Cobija recorded their second win of the season with a 1-0 success against Nacional Potosi.

That means they are now just goal difference behind Sport Boys, who drew 1-1 with Oriente Petrolero, while Club Universitario won 1-0 at The Strongest.