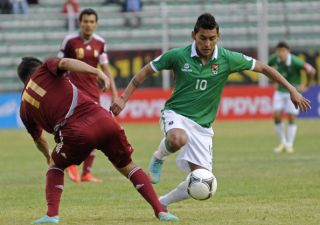 With second-placed The Strongest keeping the pressure on Bolivar with a 4-2 triumph over Sport Boys, Bolivar ensured they remained top heading into the weekend's matches with two goals in the last 11 minutes to see off Guabira.

William Ferreira put Bolivar ahead in the eighth minute at Guabira's Estadio Gilberto Parada but the home side were level at half-time thanks to Juan Pablo Rioja's 24th-minute strike.

The third-last team in the LFPB's standings looked set to claim a shock draw until the visitors hit the front again in the 79th minute.

Rudy Cardozo scored to make it to 2-1 for Bolivar, while Juan Carlos Arce doubled the visitors' lead two minutes later to wrap up the victory.

Veteran striker Pablo Daniel Escobar led The Strongest to victory, scoring a brace in the second half.

Sport Boys led after 12 minutes when Thiago Leitao scored but goals to Luis Melgar, Daniel Chavez and Escobar's brace put The Strongest in control with less than half an hour to play.

Despite Ferreira's late second goal for Sport Boys, The Strongest moved up to 12 points, level with Bolivar but trailing their local rivals on goal difference.

Bolivar have a goal difference of plus 14, while their La Paz rivals are on plus seven.

San Jose moved up to fourth with a 2-1 win away to Real Potosi, drawing within one point of Wilstermann.

Marcelo Gomes scored in either half for San Jose as the Oruro-based club took the three points at Real's Estadio Victor Augustin Ugarte.

San Jose moved ahead of Sport Boys into fourth due to goal difference and sit just behind Wilstermann, who drew 1-1 with Nacional Potosi to reach nine points for the season.

In other results, Club Universitario were denied victory as an own goal from Federico Silvestre handed Aurora a 3-3 draw, while Oriente Petrolero defeated Blooming 1-0.