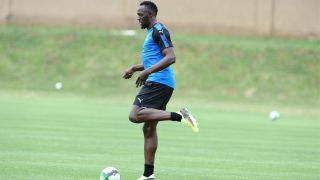 Usain Bolt is excited about his trial with Borussia Dortmund in March as the sprinting great looks to pursue a football career.

Bolt said he was looking forward to his trial with Dortmund before making a decision on whether he had a career in football.

"After the trials, then I can determine if it makes sense to do it or it doesn't make sense. That's what the plan is."

Dortmund have battled in the Bundesliga this season, sitting sixth in the table and 19 points behind leader Bayern Munich.