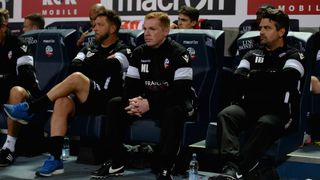 Bolton Wanderers have confirmed their players are yet to receive their November wages as the financial crisis engulfing the club deepens.

The Lancashire club have seen debts spiral out of control since their relegation from the Premier League in 2012 and announced a deficit of £172.9million in April of this year.

Reports emerged late on Sunday that the senior squad had demanded a meeting with manager Neil Lennon after learning that their salaries for the past month had been withheld and the club have since admitted that wages have not yet been paid.

Trevor Birch, who was appointed as an advisor to help to orchestrate a takeover of the club and resolve their financial plight, insists the problem will be resolved swiftly and has called a meeting with the players to be held on Tuesday.

"Bolton Wanderers Football Club can today, Monday 30 November, confirm that the first-team playing squad are yet to receive their wages for the month of November," read a club statement.

"This is due to the ongoing situation surrounding the club's ownership off the field.

"Trevor Birch, recently appointed as adviser to the Bolton Wanderers board and owner, said: 'This is due to a short-term funding issue. We are working hard behind the scenes and hope to have this resolved in a quick and timely manner and I will be meeting the players tomorrow to update them.'"

Lennon's side are bottom of the Championship heading into Monday's home game with Brentford, having won just one of their opening 17 matches this season.