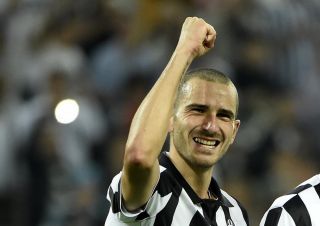 The centre-back secured all three points for the reigning champions with a superb 86th-minute volley, which proved decisive in an incident-filled contest at Juventus Stadium.

Referee Gianluca Rocchi was at the centre of controversy, awarding two contentious penalties to Juve that were converted by Carlos Tevez in the first half.

Roma also scored a spot-kick of their own through captain Francesco Totti and briefly took the lead through Juan Iturbe before Tevez's second goal ensured the score read 2-2 at the break.

Bonucci's late winner was then followed by an ill-tempered end to the game that resulted in Juve's Alvaro Morata and Roma's Kostas Manolas seeing red.

Both teams had gone into the game boasting five wins out of five in the league, but Juve are now the only club with a perfect record and Bonucci feels they have reaffirmed their status as Italy's top team.

"It was a massive three points for us," he told reporters. "We reiterated we're Italy's best team against an excellent Roma side.

"We made very few mistakes tonight, they punished us with the only opportunity we allowed them.

"We reacted strongly and managed to bring home the three points in spite of falling behind."